Have you ever wondered how saffron is grown? We dry the deep red aromatic stigmas of the “crocus sativus” flower and use them as a spice and/or dye in food and other products.

We cultivate our wonderful aromatic spice mainly in Iran. Spain, Italy, Greece, India and Afghanistan are some of the world’s other top producers. However, according to the U.N. Food and Agriculture Organization, Iran grows around 80% of the world’s saffron spice.

We painstakingly propagate the purple flowers and harvest them entirely by hand. It’s a very labour-intensive crop. The flowers only bloom in the morning. So, we have to be at work in the fields to pick them early.

Then, we leave the very gently separated, delicate stigmas to air-dry. (Although some larger farms these days use modern industrial drying techniques or charcoal fire.) The spice has a subtle, earthy and floral flavour. The special, sweet, honey-like aroma is warm and uniquely zesty.

On average 80,000 flowers will give only 500 grams of spice. It's not surprising therefore that it's easily the world's most expensive spice. 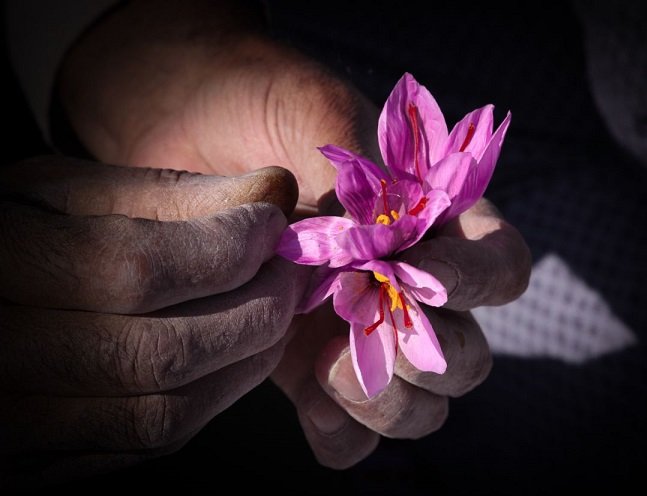 A most noteworthy fact  that’s hardly mentioned in the history of  the spice is its importance in England. It dates back to the 1300’s. The delightful market town of Saffron Walden, located in north-west Essex used to be a major centre for the cultivation of “crocus sativus“. At that time, the spice trade was so important for the town’s economy that the flower can be seen in the centre of its coat of arms. You can learn much more about the town’s past in a trip to the excellent Saffron Walden Museum.

The Use of Saffron in History

The use of the “crocus sativus” flower is widespread throughout history… Medieval monks mixed it with egg whites to create a golden glaze for their manuscripts. Cleopatra infused her bathwater with it to benefit from its essential oils and therapeutic aroma.

In a huge book by renowned botanist John Gerarde called “The Herbal or Generall Historie of Plantes” (sic) saffron’s even recommended as a treatment for Bubonic plague.

What’s Our Spice Used For?

The plant was sold in spice souks and bazaars in countries throughout Southwest Asia and as far west as  Greece. This is where it’s thought that the first cultivation of  the “crocus sativus” form of the plant began.

Some believe that the Minoans were the first to cultivate the plant. However,  the first documented reference made to it was by the Assyrians in the 7th century B.C.

The very earliest use was found in today’s Iraq. Here, paint pigments have been discovered containing its bright yellow dye. They were found on cave paintings that are 50,000 year old .

Arguably, no one uses more of this particular spice than the Iranians. You could say they have made it their very own. Apart from the bulbs,  Iranians have found a good use for all parts of the flower.

In ancient Iran (Persia) “crocus sativus” or “Zafaran” as it is called in Persian was cultivated enthusiastically. It was  and used as a spice, a dye for carpets and garments, a perfume and also in medicine.

The Iranians, along with much of the Middle East and Central Asia are indebted to Avicienna, the great Persian physician… known as the father of modern medicine. In his book “The Cannon Of Medicine” he refers to this lovely spice as “the power of life” and talks of its many benefits. The extensive research done since that time means that we can now prove his theories scientifically.

When Alexander the Great conquered Persia,  he too came to believe in “crocus sativus‘” healing powers. He told his soldiers to drink it in their tea and even infused his bath with it to heal his battle wounds.

Today if you ask any Iranian to name three essential spices from their kitchen  cabinet saffron is sure to be one of them.

To purchase any of our retail products, hot the “SHOP” button.

For other enquiries such as our wholesale prices, hot “GET IN TOUCH“.

SHOP
GET IN TOUCH
Close Menu